When it comes to the best quarterbacks of all-time, we’re weighing up raw talent, career production and team success. It isn’t all about the rings, but it’s hard to really qualify as an all-time great at the position without having held the Lombardi Trophy aloft on at least one occasion.

Many enjoy the direct path. That’s high draft pick to starter to MVP and champion. Others have had to be more patient, defying the odds to star at the professional level.

Of course, becoming one of the best quarterbacks of all-time requires more than talent and commitment. Circumstances are important. Whether that’s a relationship with a coach, the quality of the teammates or just good fortune, success as a quarterback is not something which can be achieved alone.

We’ve put together our list of the 10 greatest quarterbacks in NFL history below.

Forming a partnership with Jerry Rice, one of the best wide receivers of all-time, Joe Montana remains an icon, and not just in San Francisco. Until Tom Brady and the Patriots dominated the NFL, Montana stood alone the greatest quarterbacks of all-time conversation.

The West Coast Offense utilized by the 49ers changed the game. Montana enabled that offense with his inch-perfect passing and spot-on timing. He had the offensive weapons to help around him, of course, but Montana made life easy for his receivers.

One of the true Super Bowl heroes, Montana’s postseason heroics are the stuff of legend. Finishing with four rings and three Super Bowl MVPs, his playoff accolades cannot be rivalled by anyone other than Brady.

Some would still tab Joe Cool as the best quarterback ever.

He might have never got to grasp the Super Bowl trophy, but Dan Marino’s talent overrides any team success. Marino was a showman, a quarterback who fell into the ‘must-watch’ category. Quarterbacking came easy.

A lack of a supporting cast is what held Marino back. Where Montana had Hall of Fame receivers, running threats and an elite defense, it was not so straight forward for Marino. His production was outrageous, though. He led the league in passing yards in five separate seasons, and had three years as the leader in touchdown passes.

In fact, only five players in NFL history have registered more passing yards than Marino. He might not be in the inner circle, but there’s no way he could be left out here.

Drew Brees quietly went about his business. He did so in the shadow of Tom Brady, and without the imposing physical stature of more mobile quarterbacks. There’s not the same highlight reel as Aaron Rodgers or Patrick Mahomes, but Brees was consistent to the point of being robotic.

The end result is Brees sitting top of the all-time passing yards list and second in passing touchdowns. Brees might not have dominated for years on end, and he only got one Super Bowl win, but the production alone warrants a place among the best quarterbacks of all-time.

A long-time Baltimore Colt, Johnny Unitas played several decades before most of the other quarterbacks in this article. He laid out the foundations for the heroics many have achieved since, however.

Unitas and the Colts were innovators. They brought organization and structure to late-game offense, inventing the two-minute drill. His chemistry with Hall of Famer Raymond Berry has since been cloned by various other epic quarterback and receiver duos.

The only player to lead the league in passing touchdowns for four straight seasons, Unitas’ statistics are obviously not as gaudy as players from the modern era. Still, the three MVPs show just how influential he was at his peak.

John Elway had his detractors. Sure, he didn’t lead the Broncos to back-to-back rings on his own. Sure, he’s got fewer passing yards and fewer passing touchdowns than Matt Ryan.

If John Elway didn’t get traded to the Broncos, he could have played for the New York Yankees. In my check collection, I have a check that the Yankees minor league team cut to Elway in the summer of 1982. pic.twitter.com/NZLxQvD5lQ

Statistics are not the be all and end all here, though. Elway led his team to Super Bowl success, which is what this whole sport is about. He also had raw talent which cannot be downplayed. The mix of his athleticism and freakish arm made him a special quarterback, and one who can fairly be compared to talents like Aaron Rodgers and Dan Marino.

Elway is too often overlooked in these debates. He’s every bit deserving of a place in the top 10.

Many NFL historians would be against this pick. Terry Bradshaw’s regular season statistics are nothing to get excited about, and plenty would suggest he was nowhere near the talent level of the other nine. 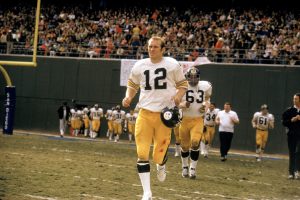 Bradshaw, however, was a big game player. He led the Steelers to four Super Bowl wins. There were all-time great passes in that selection, and he put the team on his back in the second halves of Super Bowl XIII and Super Bowl XIV.

Number one all-time in Super Bowl yards per pass and touchdown percentage, Bradshaw was a thoroughbred winner.

It’s hard to talk about legacy and Aaron Rodgers without getting embroiled in rings culture. Rodgers only has one Super Bowl win. Yet, it’s not unreasonable to say he’s the best quarterback of his generation.

Rodgers’ statistics are video-game worthy. The touchdown to interception ratio numbers are always silly, with only Patrick Mahomes able to rival him in that category. His arm strength topples many of his peers for a place on this list, and despite not having the same degree of playoff success, Rodgers has more than his fair share of trademark moments.

He deserves to be top 10 all-time, but it’s a divisive topic. Some would put him as high as top five. Others would question his place in this list at all.

Posting almost 300 consecutive starts, Brett Favre’s durability was beyond impressive. To overstate that, though, can undermine what a truly great quarterback he was in his pomp in Wisconsin.

Favre achieved many things. He toppled records, he mastered late-game comebacks, and he put in a Hall of Fame career. Perhaps most impressive, however, was winning three consecutive MVPs. The consistency to do that, to put in three straight campaigns of that standard, cannot be overlooked.

Much like Rodgers, having only one Super Bowl ring puts a ceiling on where Favre ranks among the best quarterbacks of all-time.

The career of Peyton Manning is one of the greatest in all of sport. With five MVPs, two rings and sitting third in passing yards and passing touchdowns, Manning had a long peak and for many of those years, he was the most influential player in the NFL.

Now in the commentary booth, fans are getting a chance to hear even more of Manning’s genius insight in the game. Just as he did from under center, he calls plays before it has even crossed the mind of anyone else.

With some better performances from his teammates, Manning could have finished his career with a ring or two more. Even with just the two Super Bowl triumphs, he’s locked in as a top five QB of all-time.

Any foolish doubts about Tom Brady’s GOAT status were answered with his seventh Super Bowl win. Away from the mastery of Bill Belichick, Brady proved he could go alone, and produced one of the great postseason runs, defeating Patrick Mahomes, Aaron Rodgers and Russell Wilson.

This absolutely blew my mind. I know it's not new information but my gosh

With the most career passing touchdowns and three league MVPs, there isn’t the slightest gap on his NFL resume.

The inevitable feeling of a Brady game-winning drive is perhaps the greatest compliment of all. Even in the dying stages of a Super Bowl, teams look and feel helpless as he marches down the field. For two decades he has been surgically picking apart NFL defenses.

There’s no longer an argument about the best quarterback of all-time.