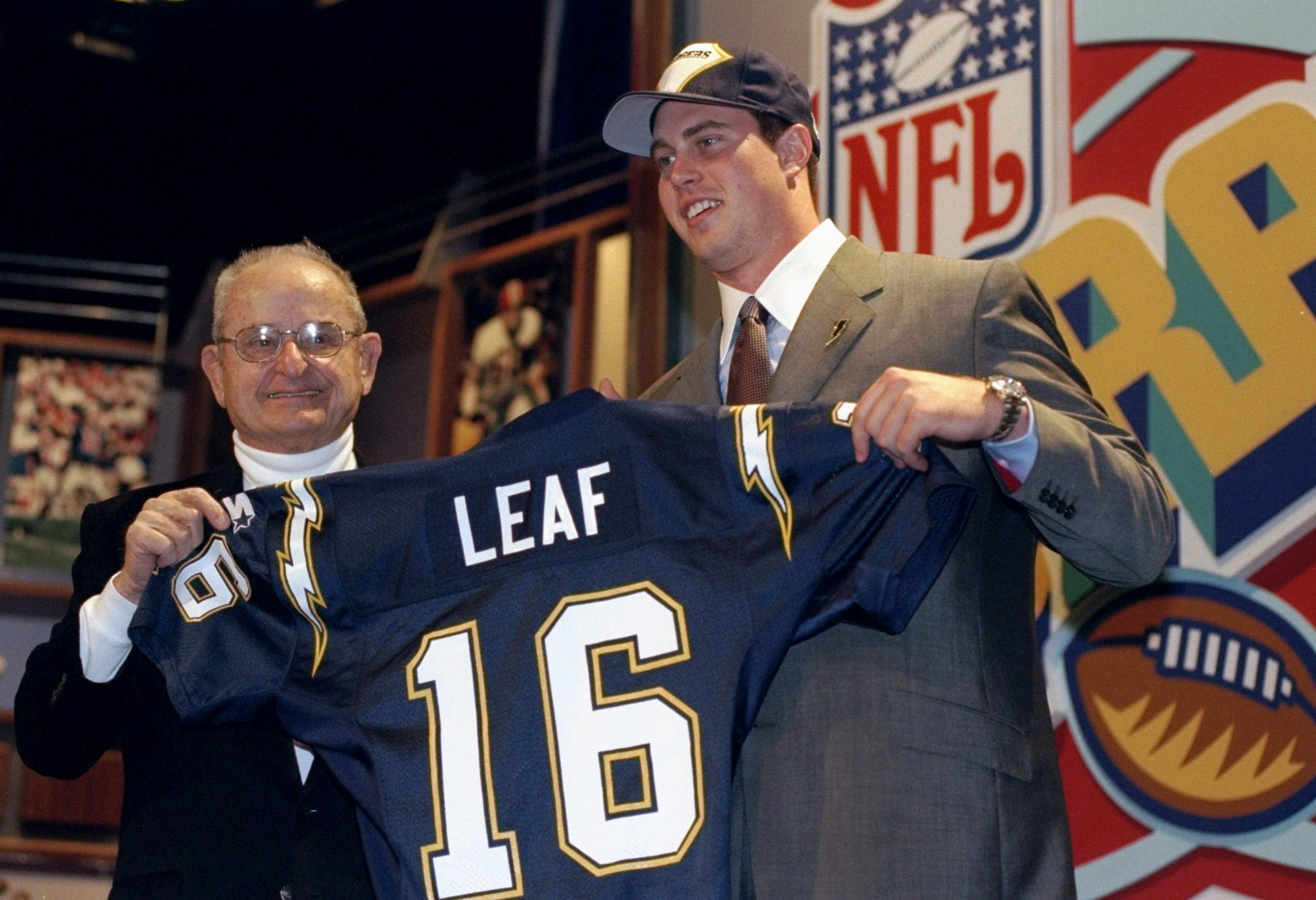 Every franchise goes into the draft with hope. Front offices and fans alike are excited before, during and after the draft, but unfortunately for some, it doesn’t always work out. Sometimes your optimism is misguided, as it turns out the franchise has picked one of the biggest NFL draft busts.

The worst NFL draft picks of all-time fall into various categories. There are quarterbacks who couldn’t make the step up. Off-field issues derailed some promising careers. Others were simply a mistake from front offices or had their professional years hampered by injuries.

We’ve looked at the best NFL draft classes ever. This time we’re investigating the other end of the spectrum – here are the biggest busts in NFL draft history.

There’s an up and down history with taking defensive ends first overall. Bruce Smith and Lee Roy Selmon are Hall of Famers. Then there are less impactful players like Kenneth Sims and Steve Emtman.

In fact, Emtman is one of the biggest NFL draft busts ever. He was twice named Pac-10 Defensive Player of the Year, but injuries ruined any hope of similar success in the pros.

Emtman’s knees repeatedly let him down. While he battled through pain at points, he ended each season on injured reserve, and ultimately was cut by the Colts when he refused to take a pay cut.

Stints with Miami and Washington followed, but his playing career ended before his 28th birthday.

A 6-foot-6, 260-pound frame is what scouts are looking for in a quarterback. JaMarcus Russell was the complete package when the Oakland Raiders selected him first overall in 2007.

2004: Freshman JaMarcus Russell knocking over Joseph Addai with a pass 💀

With the ability to ping bullet passes all over the field and with solid footwork, Russell was expected to be a star. Instead, he recorded just 18 touchdowns to 23 interceptions in the NFL and was cut by the Raiders in 2010.

Never again playing in the NFL, Russell is one of the biggest busts in NFL draft history.

Steve Niehaus was the Seattle Seahawks’ first ever draft pick when he was taken second overall in 1976. A defensive tackle out of Notre Dame, Niehaus won NFC Defensive Rookie of the Year.

Knee injuries proved his undoing, however, and the Seahawks moved on without his pass rushing dominance. Niehaus lasted just four years in the NFL, though he still holds the Seahawks rookie season sack record with 9.5.

The Dolphins traded up to draft Dion Jordan third overall in 2013. Jordan had shone as a defensive end in college, and Miami saw him as a cornerstone of its future.

That isn’t quite how events unfolded. Jordan started only one game for the Fins, serving three separate drug bans. He was ultimately released after failing a physical, and signed with the Seahawks.

Another suspension followed, as did a knee injury. He has since played for the Raiders and Niners, but he’s not got anywhere near the promise he showed in college.

A quarterback out of Tennessee, Heath Shuler was selected by Washington third overall in the 1994 draft. He landed a seven-year, $19.25 million contract, but his time in the capital was laden with controversy amid a battle with Gus Frerotte for the starting spot.

Following a rough first couple of years in the league, Frerotte displaced Shuler. He was soon traded to the Saints for late-round draft selections, but the struggles continued. A training camp deal with the Raiders didn’t offer a route back to the pros, as a recurring foot injury and continued poor play led to his retirement.

Despite being one of the worst NFL draft picks ever, Shuler still made a career in Washington as a member of the House of Representatives from 2007 to 2013.

Has there ever been a bigger gap between the first and second overall picks than in 1998?

Peyton Manning went first. Ryan Leaf was selected second by the Chargers. Leaf threw just two touchdowns and 15 interceptions as a rookie and missed his sophomore campaign through injury.

His third season was barely an improvement with interceptions blighting his game once again. He had training camp deals with Tampa Bay and Seattle either side of a short spell with the Cowboys, which continued the theme of underperformance.

Legal issues have dominated Leaf’s life since leaving the NFL.

The Cleveland Browns could have their own comprehensive list of draft busts. Tim Couch is one of many, even though he led the team to the playoffs in 2002.

If Baker Mayfield starts the final 3 games of the season, he will have broken Tim Couch’s record for most QB starts on the Browns since 1999

Injuries were a part of Couch’s struggles in the professional game, but when he was healthy, he was far from perfect. Upon his retirement in 2007, he had thrown more interceptions than touchdowns and hadn’t played in an NFL game since 2003.

Trent Richardson achieved a rare feat. He was a bust in two different cities, initially disappointing with the Browns after being taken third overall and then underwhelming with the Colts after being acquired for a first-round pick.

Richardson notched 11 touchdowns as a rookie, and amassed nearly 1,000 yards rushing. When he was traded to the Colts as a sophomore, though, his production dropped off.

He was not active for Indianapolis’ final two postseason games in the 2015 playoffs, and was suspended for the AFC Championship Game after missing a walk-through. Waived a few weeks after, Richardson later signed with the Raiders and Ravens but failed to make either team.

The former third overall pick was most recently seen in the AAF, finishing with a league-best 12 touchdowns.

Only drafted in 2017, perhaps it’s harsh to put Mitchell Trubisky among the biggest NFL draft busts. The case for Trubisky as a bust is not just about his poor play or the fact he’s already left the Bears, but the players Chicago passed on to select him.

Patrick Mahomes and Deshaun Watson were selected later in the first round. If the Bears had looked to strengthen elsewhere, they could have picked Christian McCaffrey, T.J. Watt or Jamal Adams.

Chicago has since moved on to Justin Fields after Trubisky recorded 64 touchdowns and 37 interceptions across four seasons in the Windy City. The former second overall pick is a backup to Josh Allen in Buffalo.

Four of the top five picks in the 1989 NFL draft are in the Hall of Fame. Troy Aikman went first. One of the best running backs ever, Barry Sanders, was picked third, while Derrick Thomas and Deion Sanders were taken fourth and fifth respectively.

Selecting second, Green Bay made one of the worst NFL draft picks of all-time. Tony Mandarich was an offensive tackle out of Michigan State and was twice named Big Ten Offensive Lineman of the Year. He seemed an ideal rookie to put in front of Brett Favre.

It didn’t work out. Mandarich held out until just a week before the regular season and spent much of his rookie season on the special teams unit.

A poor attitude contributed to the Packers cutting Mandarich in 1992, and he then battled addictions with drugs and alcohol. Despite returning to the NFL with the Colts, he finished his pro career with just 63 starts.