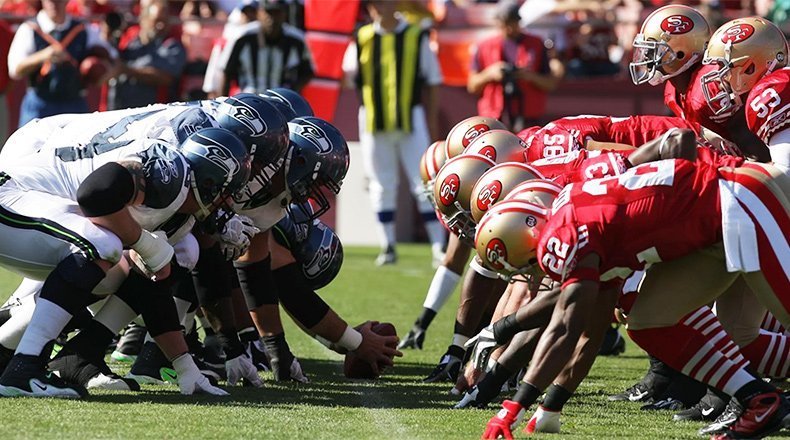 There are various reasons for an NFL matchup to become one of the biggest NFL rivalries. Sometimes it’s history. Sometimes it’s geography. On occasion, it’s from a particular meeting or a duel between specific players that has engulfed franchises and cities.

These tensions enhance the NFL season, just as they do in other sports. A Sunday afternoon game has a bit extra thanks to the greatest NFL rivalries.

This conference rivalry is directly linked to the never-ending Peyton Manning and Tom Brady comparisons. Denver and New England first played in 1960, and have had countless classic games over the following decades.

The biggest moments, though, have been since the turn of the century. This became one of the biggest NFL rivalries as the teams met in the 2013 and 2015 AFC Championship Games. The Broncos won both, allowing them to represent the AFC in the Super Bowl.

Most teams view the Patriots as a rival. Whether Denver is the biggest or not is subjective, but it’s certainly been one of the most significant over the last decade.

The NFC East is renowned for its tough NFL rivalries. We’re giving the Cowboys and Eagles the edge this time round, given how often they have fought for divisional titles over the last few decades. 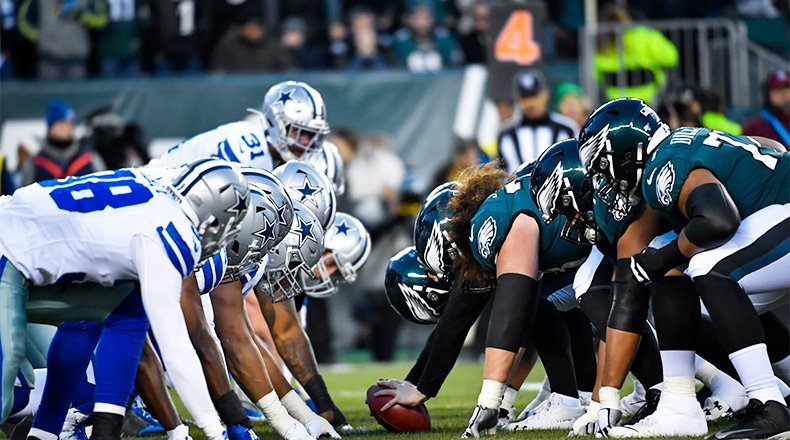 Playing twice a year, there’s plenty of room for tension to build between organizations, players and fans. The Cowboys and Eagles have more at stake than one win when they’re tussling for the division.

The four postseason meetings just add to the legend of the Cowboys vs the Eagles.

History is the cornerstone of this matchup. The Chicago Bears and Green Bay Packers have been rivals for the best part of a century, and have combined for 22 NFL titles and almost 50 players inducted into the Pro Football Hall of Fame.

The atmosphere at Solider Field or Lambeau Field when these two teams meet is different. Often picked for nationally televised games, it’s always a special occasion, even with the clubs meeting twice every season.

The Wisconsin versus Chicago rivalry has even spread into other sports with the Brewers and Cubs and Bulls and Bucks.

A newer rivalry than others here, the San Francisco 49ers and Seattle Seahawks only became divisional opponents in 2002. Their general dislike of each other didn’t flourish until a few years later.

It started as Pete Carroll and Jim Harbaugh bringing their college rivalry into the NFL. Many massive regular season games followed between the two, and they each had trips to the Super Bowl, with the Seahawks beating the Niners on their way to the Big Game.

After a lull, this rivalry has reignited in recent seasons, spurred on by Richard Sherman’s decision to sign in north California.

This one isn’t like the others. While sharing a stadium, the Giants and Jets rarely meet. The NFL schedule means teams in separate conferences only play once every four years. The Giants and Jets have 14 games against each other all-time.

It’s often referred to as the ‘shortest roadtrip in the league’. Co-habiting in a stadium is going to fuel any rivalry, and that’s obviously been the case here. They might not be going head-to-head every year, but just like the Mets and Yankees, being the two teams in New York brings a natural NFL rivalry.

The Giants own the longest winning streak in the history of this rivalry, winning five straight from 1996 through 2011.

This one has proper history. The Raiders and Chiefs were divisional foes back in the AFL in 1960. These are franchises that have duelled for decades, leading to high-intensity games and particularly raucous crowds.

The Raiders had the upper hand in the 1970s and 1980s, but Kansas City has been dominant in recent years. As the Chiefs contend for Super Bowls and extend their postseason streak, the Raiders are battling for relevancy.

Meeting in multiple Super Bowls is a solid foundation for a rivalry. Pittsburgh and Dallas have played in the Super Bowl on three occasions – the ‘Steel Curtain’ Steelers beat Dallas in 1976 and 1979, and the Cowboys bested Pittsburgh in 1996.

These teams might only matchup every four years, but the history of the contest makes it one of the biggest NFL rivalries. Pittsburgh and Dallas are football-obsessed cities, and two of the NFL’s powerhouses.

🗓 On this day in 1979, Terry Bradshaw threw four TD passes as the Steelers beat the Cowboys 35-31 in Super Bowl XIIIpic.twitter.com/Mw3pNVl1bZ

The Steelers have the better record since they last faced off in the Super Bowl, but Dallas is in the ascendancy, while Pittsburgh looks for its future quarterback.

Buffalo and Miami have played each other over 100 times. Miami has the historical advantage, though the Bills have won three of the four postseason meetings, including the 1992 AFC Championship Game.

Divisional rivalries tend to meander depending on the competitiveness of the two teams. This fierce NFL rivalry surged with Jim Kelly and Dan Marino under center in Buffalo and Miami respectively, and lulled in the early part of the 21st century.

There are signs that the intensity could be cranked back up in the 2020s with the Bills positioned to be a playoff team throughout the decade, and the Dolphins hoping to follow suit.

The Cowboys and Packers are two of the most well-known NFL teams around the world. However, the basis of the rivalry is more complex, going back to two periods of fierce competition.

Both franchises duelled around the AFL-NFL merger in the 1960s, with the Packers twice beating Dallas in dramatic fashion in the playoffs.

The second spell was in the 1990s. Dallas and Green Bay combined for five Super Bowl appearances between 1992 and 1997, with the Cowboys owning a 9-1 record across the decade.

Another Super Bowl appearance 🔒'd up for the @dallascowboys as @EmmittSmith22 cashes in!

The Packers have asserted themselves in this rivalry in the Aaron Rodgers era. Rodgers has dominated the Cowboys throughout his career, leading to a 7-1 record in the 2010s.

The Niners and Rams first played in 1950. This was guaranteed to feature among the biggest NFL rivalries, because it ticks more than one box.

It has the history, they’re in the same division, and there’s the underlying context of San Francisco versus Los Angeles.

Of course, another angle was added when the Rams relocated to St Louis. While it lost the geographical aspect, the contrasting cultures of north California and Mid-West provided a fresh layer.

It was all about the Rams in the early years, even establishing a 22-game advantage in the all-time series. The Niners roared back in the 1990s, however, going 17 unbeaten in the Battle of California.

Much like the Niners and Rams, the Jets and Patriots’ can split their contests into separate periods. New York had the upper-hand until the 2000s, when the winning machine of Bill Belichick and Tom Brady brought a lot of pain for Gang Green.

New England has gone 35-11 against the Jets since the turn of the century. Mac Jones has picked up where Brady left off, with the Jets unable to compete.

Perhaps the Jets and Patriots’ rivalry is in the shadow of the Red Sox and Yankees, but with two games a year against each other and only a short car journey apart, this matchup was guaranteed to make our top 15.

Not only one of the biggest rivalries, this is the NFL’s oldest contest. Detroit, then known as the Portsmouth Spartans, faced the Green Bay Packers back in 1930, and they have played twice a year since 1933.

Animosity has developed over nearly a century. Detroit has spent much of its history in Green Bay’s shadow, as illustrated by their three division titles to the Packers’ 18.

Arguably the most famous moment in this rivalry came in 2015 when Aaron Rodgers masterminded a 20-point comeback in front of a stunned Ford Field crowd.

Atlanta and New Orleans arrived in the NFL just a year apart in the 1960s. As the first two teams in the traditional Deep South, a rivalry was inevitable from their first seasons in the National Football League.

It’s crucial in a rivalry that both sides recognize its significance. That’s certainly the case here, with Falcons and Saints alike being desperate to win the matchups.

This duel has only intensified with the two franchises competing for playoff positioning for most of the 21st century.

Jacksonville only entered the NFL in 1995, but that doesn’t take away from what this rivalry has become. With both teams gunning for the Super Bowl in 1999, Tennessee handed the Jaguars their only two regular season losses and toppled them again in the AFC Championship Game.

There was controversy around those matchups in 1999, and the general dislike between the two organizations has spilled over into the following decades.

These teams always play each other hard – there’s physical defense, hostile crowds and fired up players.

There’s a strong argument that this should top the list of the biggest NFL rivalries.

The Ravens and Steelers are often battling at the top of the AFC North, and they traditionally both field strong defensive teams, leading to plenty of bruising play.

It’s 3-1 to Pittsburgh in postseason contests, including a victory in the 2009 AFC Championship Game. The hostility simmered throughout the 2010s, with Baltimore winning a Super Bowl and claiming 13 of their 23 games against Pittsburgh.