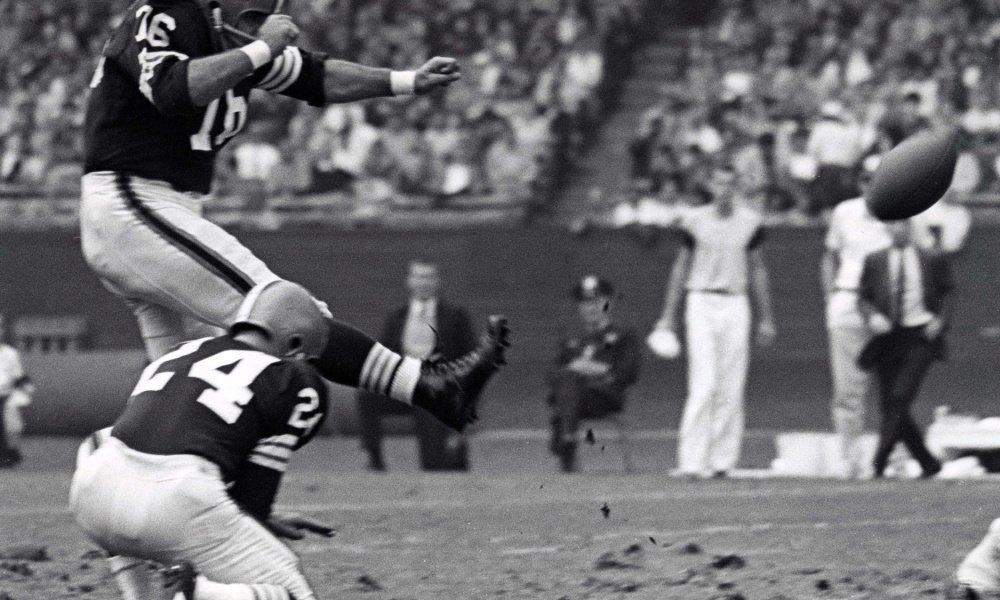 The best kickers of all-time have wrestled with immense pressure, often having to step up in the biggest moments of all. The NFL is regularly defined by physicality, but that’s a non-factor when it comes to kicking, a skill which stands out from the rest on the football field.

It can be hours of waiting on the sidelines. Swinging their leg through warm-up kicks aplenty does little to prefer for the crucial extra point or clutch field goal.

Kickers can be the hero or the villain. There’s rarely much in between with the pressurized nature of their role.

It takes longevity, ice-in-your-veins cool and granite resilience to be recognized as one of the greatest kickers in NFL history.

Kickers aren’t generally iconic. Adam Vinatieri has broken that norm. With three kicks sealing Super Bowl wins and the notorious ‘Tuck Rule Game’, Vinatieri has been the face of the NFL’s best kickers for over two decades.

Adam Vinatieri had a truly legendary career. He will always be a Patriots legend.

For the Patriots and then the Colts, Vinatieri has impacted playoff football more than any other kicker. He’s been pivotal in every one of his four Super Bowl rings.

The NFL records are plentiful, too. He’s the leader in field goals made and points scored. His 397 games played across the regular season and playoffs is the most ever. Across 2015 and 2016, he made an NFL record 44 consecutive field goals.

Playing from the early eighties through to 2007, Morten Andersen is the all-time leader in NFL games played. Adam Vinatieri is the only player to have converted more field goals and scored more points.

Initially starring for the New Orleans Saints, the Copenhagen-born kicker was released in 1995, with the Saints looking to free up salary cap space. There was a growing belief that Andersen was past his best, a notion he soon proved to be incorrect.

.@GreatDane2544 hopped off the convertible for a little kicking expo on the parade route! pic.twitter.com/1ruOjjJlNr

Playing against the Saints for the Falcons in the following season, he became the first player ever to score three field goals of over 50 yards or more in the same game. Just a couple of seasons later, he was still as deadly as ever, kicking the field goal to send the Falcons to the Super Bowl.

Named to two All-Decade teams, and with seven Pro Bowl selections, Andersen was inducted to the Hall of Fame in 2017.

As the all-time leader in field goal percentage, it wasn’t a debate about whether Justin Tucker would make this list.

Sure, he only came into the league in 2012, meaning he doesn’t have the same track record as many of the others featuring here, but Tucker’s impact on the Ravens has been remarkable. It took six full seasons before he missed an extra point, and he went an outrageous 28 for 29 from the field in 2019.

From BEHIND the logo pic.twitter.com/GOUF2vbgTY

A Super Bowl champion and four-time All-Pro selection, Tucker is as elite as they come.

Robbie Gould is the Chicago Bears’ all-time leading scorer. He left Soldier Field in 2015, however. A brief stint with the Giants followed before finding a new home with the Niners.

Sixth in field goal percentage and 11th in total field goals, Gould is going strong even into his late-thirties. He will climb the leaderboards over the coming seasons.

Playoff outings have come and gone throughout Gould’s career. There have been minimal chances to build a postseason reputation, but in a relatively small sample, he’s never let his team down. The former Penn State kicker is yet to miss in the playoffs.

Just Adam Vinatieri and Morten Andersen have scored more points than Gary Anderson. Becoming the first South African to play in the NFL, Anderson set a phenomenal pace with his points scoring. His career peaked when he was 100% from the field and extra points in 1998.

He might only be 58th all-time in field goal percentage, but Anderson’s ability to stick in the professional game until his mid-forties cannot be overrated.

The numbers speak for themselves. Anderson was a lock to be among the best kickers of all-time.

The NFL record holder in consecutive extra points converted, Stephen Gostkowski has a resume that he could only have dreamed of when he was drafted in the fourth round back in 2006.

Every Stephen Gostkowski made FG from today. 😏 pic.twitter.com/9LaOLjSdSt

Ninth in field goal percentage and 11th in total field goals, Gostkowski’s legacy goes far beyond the raw numbers. He was often compared with Adam Vinatieri in his early Patriots years, and he lived up to the loftiest of expectations.

Making 39 of his 44 field goal attempts in the playoffs as a Patriot, Gostkowski was at the center of those great New England teams. He played in six Super Bowls, winning three of them.

It’s hard to have a revolution with something as seemingly straightforward as kicking the ball through the uprights. Lou Groza changed the game, though, becoming the first kicker to be considered a real threat from up to 50 yards.

A kicker being able to put points up from that sort of range altered how defenses would play. It obviously made it easier for Groza’s team (the Browns between 1946 and 1959 and then 1961 and 1967) to get into field goal range.

Records tumbled throughout Groza’s career. He was doing things that others didn’t even consider. While he’s down in 21st in total points now, he was top of the pile when he hung up his cleats in 1967.

A deserving Hall of Famer, Groza won four NFL championships and was named to the Pro Bowl on nine separate seasons.

There are bonus points for being able to contribute beyond kicking the ball. George Blanda had that ability, once throwing seven touchdown passes in a game.

Away from his all-round gifts, though, Blanda was an historically great kicker. He’s made the most extra points ever, splitting his lengthy career across the AFL and the NFL. Playing in 26 seasons of professional football, he’s the longest serving player of all-time.

When he retired in 1975, Blanda owned the majority of kicking records. Many have since been surpassed, but there’s no question he was the finest of his generation. He was even named Associated Press Athlete of the Year in 1970.

Jason Elam had power, he had the knack to deliver in big moments, and he had longevity. Check those three boxes and you’ve got a good chance of being considered among the best kickers of all-time.

A barrage of individual records speak for themselves. Elam has the best extra point percentage, most consecutive seasons with at least 100 points, and he was the fastest to 300 successful field goals.

His nine overtime field goals is also a joint NFL record. Only one kicker in league history has bettered his longest field goal.

There’s really no means of reasonably talking down Elam’s achievements. For good measure, he was named to the Pro Bowl on three occasions and won two Super Bowls with the Broncos.

Fourth all-time in points scored, there’s no question about Jason Hanson’s place on this list. Only three players in league history have scored more field goals than the long-time Lion, and he did it on solid efficiency.

While his playoff career was limited to just six games, with Detroit never going on a run, Hanson delivered in plenty of clutch moments throughout the regular season. His Lions records will stand for many years to come.