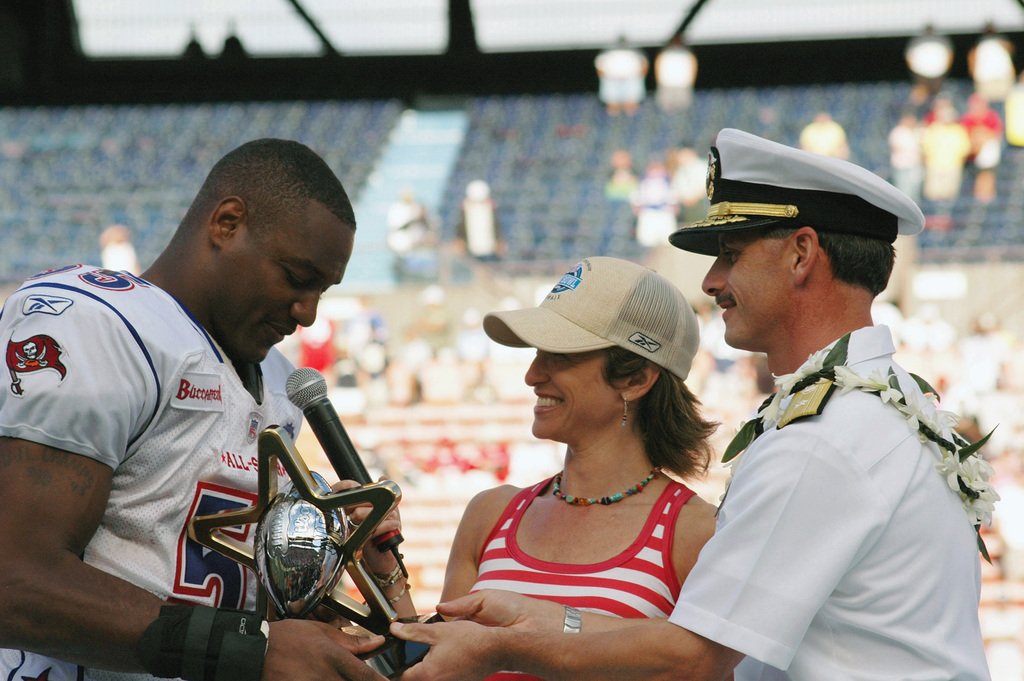 The best linebackers of all-time are some of the most intimidating athletes in sport. Known for their athleticism, reading of the game and hard hits, they can be every bit as game-changing as an all-time wide receiver or dominant running back.

Rule changes have altered the role of linebackers. The amount of physicality allowed has decreased over the years. Still, though, they provide the most earth-shaking of hits, whether preventing the run or getting to the quarterback.

Where the best safeties are famed for their interceptions, it’s a different aim for the linebackers. They have to be versatile. Scheme can change the physical and mental demands significantly.

Here are 10 of the best linebackers of all-time…

With the third-most sacks in NFL history, there’s no question Kevin Greene belongs among the best linebackers of all-time. His 160 sacks is the most among linebackers.

Inducted into the Hall of Fame as recently as 2016, Greene’s career was arguably underrated. He was selected to the 1990s All-Decade team. He was a five-time Pro Bowler, and even earned Defensive Player of the Year honors in 1996. 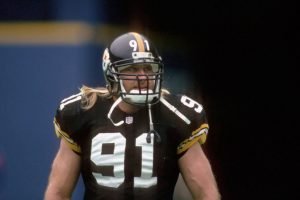 Greene’s career went beyond the gridiron. Not only a fearsome linebacker, he took his talents to wrestling for several years, though his late-career contracts prohibited him from taking part.

Ray Lewis had everything. He was the foundational piece of the Baltimore Ravens defense which led them to two Super Bowls. Some all-time great defenses leaned on Lewis. 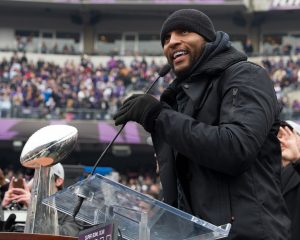 His career and life wasn’t without scandal, but Lewis’ NFL legacy speaks for itself. Lewis was not just a phenomenal linebacker. He was a leader of men, and a scary opponent.

It’s a subjective call on whether he’s the best linebacker ever, but there’s no question he’s in the discussion. Brickwall could do it all.

Only two defensive players in league history have been named MVP. Taylor is one of them. His list of honors is outrageous.

There’s the two Super Bowl rings. There’s his number being retired by the Giants. L.T. was also a three-time Defensive Player of the Year, an eight-time First Team All-Pro, and led the league in sacks in 1986. 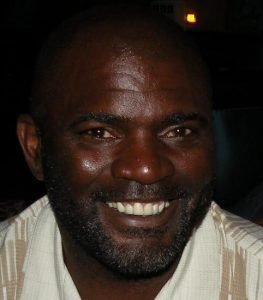 The game literally changed because of Taylor. Opponents had to alter their gameplan to slow him down. His physical attributes were obvious, but it was the ability to read the game, and to pull off an array of moves, which made him so unstoppable.

Many have named Lawrence Taylor one of the best players in NFL history.

Entering the Hall of Fame at the first time of asking, Dick Butkus was arguably the most terrifying defender in the league during his nine years with the Chicago Bears.

What he achieved in a relatively short career cannot be overstated. Butkus was invited to eight Pro Bowls. He reached All-Pro status on six occasions and is one of just a handful of players to win multiple Defensive Player of the Year awards. 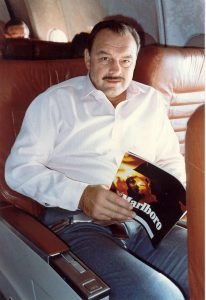 Some are known for crashing into quarterbacks. Butkus was famed for his tackling and interception ability. He had a knack for forcing turnovers, and many believe he had a defining role in how the middle linebacker position is played.

Jack Lambert was one of the stalwarts in Pittsburgh’s ‘Steel Curtain’. It’s one of the greatest defenses in NFL history, and it’s no surprise it included one of the best linebackers of all-time.

Lambert helped the Steelers win four Super Bowls in six years. There were eight All-Pro selections along the way, and he was named Defensive Player of the Year in 1976. 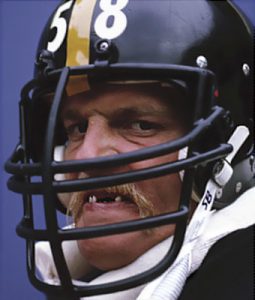 Like others, Lambert reinvented the position. He played less of a run-stopping role in Bud Carson’s defense, dropping between the safeties. The speed and agility he possessed made it feasible to cover so much ground, and helped the Steelers become a dominant defense.

Bobby Bell played outside linebacker for Kansas City. His career began in 1963 and lasted until 1974. Bell was a unique threat to intercept and complete a pick six. He registered nine career touchdowns, six of which followed an interception.

Named to the NFL 100 All-Time Team, Bell perhaps isn’t as well remembered as others in this article. He achieved it all, though. He was electrically quick, and not just for a linebacker. 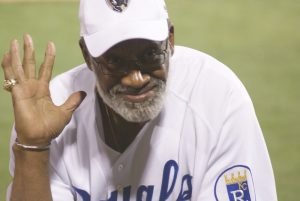 Whether blitzing or tackling in the open field, Bell was a complete package. His tendency for highlight reel plays would be perfect in the social media era.

Derrick Thomas is one of the great NFL tragedies. The Chiefs icon passed away aged just 33 due to injuries sustained in a car accident. He was an ever-disruptive pass rusher throughout his decade-long NFL career.

Thomas is Kansas City’s all-time leader in sacks, and ranks 17th among all players. The fact he achieved that in just 157 league starts shows how unstoppable he was. 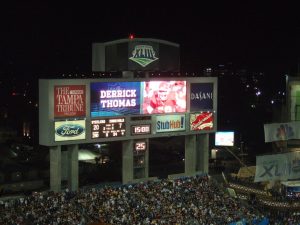 While his career was tragically cut short, Thomas was posthumously named to the Pro Football Hall of Fame.

Wildly passionate on the field and with a real instinct for knowing where to be, Junior Seau was a pest for every offense. He racked up over 1,800 tackles over his NFL career with the Chargers, Dolphins and Patriots.

There was a Defensive Player of the Year, nine All-Pro selections, and he was named to the 1990s All-Decade Team. 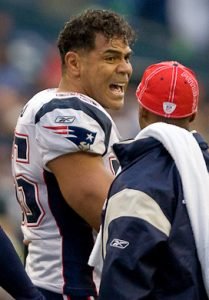 Sadly, though, Seau committed suicide at the age of 43. It was believed to be the result of CTE. He was inducted into Canton three years after his death.

Making over 1,700 tackles and forcing 49 turnovers is a good way to lock up a place in the Hall of Fame. It’s also enough to book in a slot among the best linebackers of all-time. 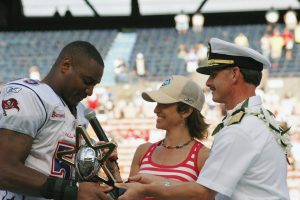 Derrick Brooks spent all of his career with Tampa Bay. Super Bowl XXXVII resulted in a ring. Defensive Player of the Year honors went his way in 2002. Brooks, though, mixed longevity with peak performance. He was nine-times an All-Pro selection and was selected to the Pro Bowl in 11 seasons.

His career got off to a flying start with a stellar rookie year, and he never looked back.

Patrick Willis’ NFL career was shorter than many others featured here. That doesn’t downplay his impact, however, as he was named to the Pro Bowl in every season in which he played more than four games. 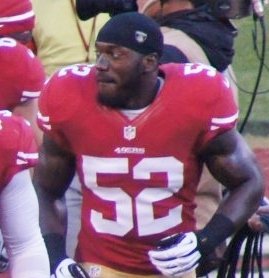 Willis earned awards (named after Jack Lambert and Dick Butkus) in college. It resulted in being taken 11th overall by the Niners, and he was immediately a force in the pros. He led the NFL in tackles and earned first team All-Pro as a rookie.

Read More: 10 of the Best NFL Wide Receivers Of All-Time

A toe injury meant his career was relatively short. Willis still accumulated an extraordinary NFL resume, however, cementing his place among the best linebackers in league history.